A trace file has three types of records:

To extract the information from the trace records in a flexible and powerfull way, Paraver is structured in three levels of modules. 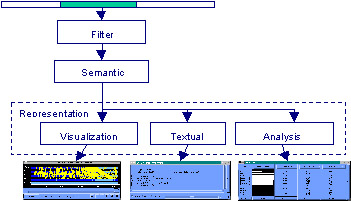 The whole operation of Paraver corresponds to a demand driven evaluation, where the Representation module inquires the semantic module for values and this one asks for the records it needs to the filter.

The Filter module has direct access to the trace and provides to the Semantic module a partial view of the tracefile.

The Semantic module is the key of the expressive power of Paraver. Its role is to generate a numeric value (semantic value) for each object to be represented. For each object, the semantic value is a function of time that is computed from the records that correspond to the object following the corresponding object model structure.

Two additional functions such as sign, div, mod, stacked val can be composed on top of the hierarchically computed value.

The events in the trace that reach the semantic module are passed unaltered to the next module.

Three Representation modules are available: Visualization, textual and analysis. Each of them handles one of the three types of views as described in the introduction.